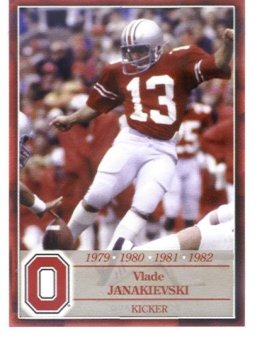 Vlade Janakievski is a former American football placekicker for the Ohio State Buckeyes. He was a walk-on player from the soccer team who handled the placekicking duties for the Buckeyes in the 1977-1980 seasons.

During Janakievski’s career at Ohio State he was the first OSU kicker to be selected twice to the All-Big Ten team. In his first year as a kicker (1977), he made all 44 of his extra point attempts, and is second all-time in extra points for the Buckeyes. He set numerous records during his time playing for coaches Woody Hayes and Earle Bruce.

Janakievski finished his Buckeye career second of the Ohio State’s all-time scoring list (behind Pete Johnson), with 179 career points. Nearly 20 years later he remains fifth on that list. Only Keith Byars, Dan Stultz, and Mike Nugent have since surpassed his career total.

Janakievski currently owns and operates a deli named “Easy Living Deli”, located at 1355 W. Lane Ave, Columbus Oh., just a few minutes from The Ohio State University where he attended school and played for the Buckeyes.